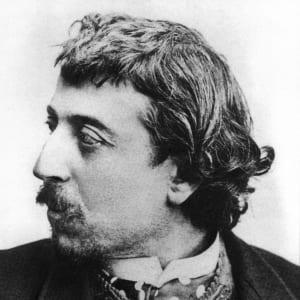 Scroll Down to view artwork currently in inventory.

A French post-Impressionist artist, Paul Gauguin was an important figure in the Symbolist art movement of the early 1900s. His use of bold colors, exaggerated body proportions and stark contrasts in his paintings set him apart from his contemporaries, helping to pave the way for the Primitivism art movement. Gauguin often sought exotic environments and spent time living and painting in Tahiti.

Initially, Gauguin was a financially successful stockbroker and self-taught amateur artist when he began collecting works by the impressionists in the 1870s. Inspired by their example, he took up the study of painting under Camille Pissarro. Edgar Degas and Pissarro arranged for him to show his early painting efforts in the fourth impressionist exhibition in 1879 (as well as the annual impressionist exhibitions held through 1882). In 1882, after a stock market crash and recession rendered him unemployed and broke, Gauguin decided to abandon the business world to pursue life as an artist full-time.

In 1886, Gauguin went to Pont-Aven in Brittany, a rugged land of fervently religious people far from the urban sophistication of Paris. There he forged a new style. He was at the center of a group of avant-garde artists who dedicated themselves to synthétisme, ordering and simplifying sensory data to its fundamentals. Gauguin’s greatest innovation was his use of color, which he employed not for its ability to mimic nature but for its emotive qualities. He applied it in broad flat areas outlined with dark paint, which tended to flatten space and abstract form. This flattening of space and symbolic use of color would be important influences on early twentieth-century artists.

In Brittany, Gauguin had hoped to tap the expressive potential he believed rested in a more rural, even “primitive” culture. Over the next several years he traveled often between Paris and Brittany, spending time also in Panama and Martinique. In 1891 his rejection of European urban values led him to Tahiti, where he expected to find an unspoiled culture, exotic and sensual. Instead, he was confronted with a world already transformed by western missionaries and colonial rule. In large measure, Gauguin had to invent the world he sought, not only in paintings but with woodcarvings, graphics, and written works. As he struggled with ways to express the questions of life and death, knowledge and evil that preoccupied him, he interwove the images and mythology of island life with those of the west and other cultures. After a trip to France (1893 to 1895), Gauguin returned to spend his remaining years, marred by illness and depression, in the South Seas.