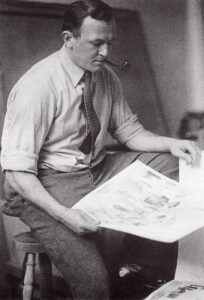 Scroll down to view art work currently in inventory.

The German painter and graphic artist George Grosz (1893-1959) was the most outstanding caricaturist and political satirist of the period after World War I.

George Grosz was born on July 26, 1893, in Berlin. He studied at the art academies of Dresden (1909) and Berlin (1911) and visited Paris (1913). He started his career as a cartoonist for humoristic reviews such as Ulk and Lustige Blätter; his concern for the actualities of the day was even then predominant.

During World War I Grosz was an infantryman in the German army. About 1916 he began to portray with biting satire the militarism and ruthlessness of the ruling classes. In Berlin in 1917 he joined the Dada movement, which was essentially a protest against war and exploitation and a call for a new humanism. By 1918 he was acknowledged as Germany’s leading social critic in the field of the visual arts, whose pity for the underdog and hatred of capitalism penetrated deep into the consciousness of the postwar mentality in a Germany riddled by misery, inflation, and political failure.

Grosz’s lithographic series in particular made him internationally known. His style was quite novel in the history of modern draftsmanship. His most famous series are Das Gesicht der herrschenden Klasse (1919), Abrechnung folgt and Ecce Homo (both 1922), Spiesser Spiegel (1924), and Das neue Gesicht der herrschenden Klasse and Die Gezeichneten (both 1930). Only the work of the German painter Otto Dix could compare with the acidity, the fantastic aggressiveness, and the determination of Grosz to unmask the social lie, the cruelty of war, and the depraved moral code.

In 1920 Grosz visited Italy, and in 1922 he spent 6 months in Russia. About 1925 he approached in his paintings a style that was more realistic; it was called the Neue Sachlichkeit (New Objectivity), and it was a reaction to the expressionist trends of the era.

In 1932 Grosz accepted an invitation by the Art Students League of New York City to teach there. The following year he opened an art school, which he conducted until 1937. That year he was included in the German exhibition of “degenerate” art; a year later he was deprived of his German citizenship and became an American citizen. Grosz taught at the School of Fine Arts, Columbia University (1941-1942). For a short time he painted landscapes and figural compositions with nudes, but he soon returned to works in a social realist mode. He died in Berlin on July 6, 1959.