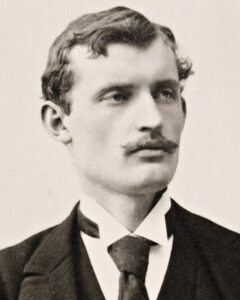 Scroll down to see his artwork currently in inventory.

The Norwegian artist Edvard Munch (1863–1944) is today revered for his passionate visual expression of intense human experiences. “Art is your heart’s blood,” he said. His most famous image—a screaming figure, its eyes wide with horror—is an icon of anxiety, alienation, and anguish. Attraction and love as well as jealousy and death were also recurring themes. His continual reworking of these subjects is commonly linked to Munch’s personal struggles. As he himself observed, “Sickness, insanity, and death were the angels that surrounded my cradle and they have followed me throughout my life.” Before he reached the age of thirteen, Munch’s mother and older sister both succumbed to tuberculosis; later his brother died from the disease, and another sister was diagnosed with a mental illness. The artist too was stricken with health problems that cast a shadow over his adult life. The real power of his art, however, lies less in his biography than in his ability to extrapolate universal human experiences from his own life.

Printmaking was an essential component of Munch’s art following his introduction to the graphic media in 1894. With the capacity to produce multiple works from a single plate, stone, or woodblock, printmaking served to expand the accessibility of the artist’s themes to the general public and to provide income. It also enabled him to experiment with his imagery: by altering color, line, texture, and composition, Munch drastically changed th