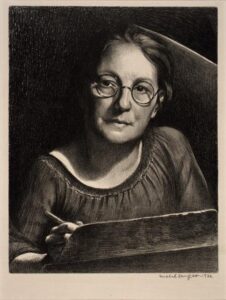 Scroll down to see artwork currently in inventory.

Mabel Dwight was dubbed by Carl Zigrosser as the master of “comédie humaine” due to the way she captured daily human drama in her art. Dwight used a variety of expressive devices to capture the emotional range of a crowd with body language. She often creates the works with a perspective of being in the midst of the activity with her own reactions integrated into the captured bystanders.

Interestingly, Dwight was an extremely private person.  She began her career as a printmaker when she was 52 and already not in the best of health. She rarely spoke of her personal life to anyone nor did she keep a journal or diary.  In fact, even her surname “Dwight” was invented to maintain her privacy. [Paraphrased from the Mabel Dwight Catalogue Raisonne by Robinson/Pirog]